I recently watched the movie “On the Basis of Sex,” the story of Ruth Bader Ginsburg. And you should watch it, too, because you need to understand your audience. 

The movie is well done, and it reminds us of our history. 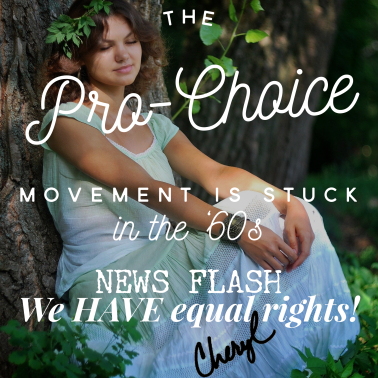 I don’t particularly care for the ACLU today, and I am greatly disappointed that Ruth Bader Ginsburg is for pro-abortion laws. 

But Ruth Bader Ginsberg and the ACLU did a lot of legal work in the 1970s to give women and men equal rights. And for that, we should be grateful.

 But I stopped and thought about all the things I hear the pro-choice movement say today.

I thought about Alyssa Milano‘s announcement of her two abortions and everything she had to say against men.

And I realize that it’s as if the pro-choice movement is stuck in the 1960s and 70s, thinking that women do not have equal rights. 

But it’s worse. The pro-choice movement—led by women like Gloria Steinem, who actually remembers what it was like in the 1970s—keep telling the younger generations that we women don’t have equal rights. Or that sex is unfair.  

It’s the age of women!

Women are in leadership roles.

Women have all sorts of legal protections for having children and working in whatever kind of job they want.

Women have been very successful with babies on their hips. Ask Taraji P Henson!

It seems that women are upset that men can have sex and walk away, but women can’t. That’s what I heard Alyssa Milano say.  That’s the new equal rights they are fighting to keep.   

The pro-choice movement is fighting to keep the right to have sex with anyone and everyone and still be able to walk away from both the responsibility of a child and the relationship with their sex partner. 

What the pro-choice movement doesn’t seem to realize is that once they have an abortion, they are spiritually dead.

Their souls are dead.

They have no conscience. Or, they become depressed—cutting, drinking, drugs…

Is this not oppressive of who we are as women?

Why would we allow anyone to oppress us? This is the age of women!

And men benefit from abortion!

Abortion allows men to go around and have sex with whoever they want without any legal consequences.

Tell him to man up and get a job.

Cheryl, author & speaker, helps you reach the abortion-minded for Christ and for life so that abortion within The Church is reduced from 36% to 0%. Her first book in the Faces of Abortion Series, ReTested, is available on Amazon and Barnes & Noble and her prayer booklet, Worship to End Abortion, is available on Amazon. View all posts by Cheryl Krichbaum