When pastors and prayer leaders talk about revival, they usually quote 2 Chronicles 7:14:

“and My people who are called by My name humble themselves and pray and seek My face and turn from their wicked ways, then I will hear from heaven, will forgive their sin and will heal their land.”
2 Chronicles 7:14 NASB

Have you ever noticed that this verse is an if/then statement?

If we want revival, then we need to pray about abortion in humbleness while seeking His face and turning from our wicked ways.

You may be saying, “Turning from our wicked ways? But I haven’t had an abortion!”

Perhaps not. But I ask you this: Have you done the very thing that causes most of the unwanted pregnancies?

That is, have you had premarital sex?

I do not know what the statistics are, but given how pervasive premarital sex is in our culture, I would guess that the number is large. How is it that we cast judgment on women for being pregnant out of wedlock when we ourselves have had premarital sex?

We cannot go before the throne of God and plead with Him to save unwanted babies if we have not repented for our premarital or extramarital sex ourselves.

Some of you may wonder if it was okay to have sex with a man and then marry him. No! It was not okay for me to have premarital sex with either of my husbands. Hebrews 13:4 says:

Marriage is to be held in honor among all, and the marriage bed is to be undefiled; for fornicators and adulterers God will judge.

“Adulterers” is translated from “moichos” and means exactly what you think it means: unfaithfulness to your spouse.

If you are one of the few who have not had premarital or extramarital sex, then pray in mourning for our country and the world anyway because we have a culture of sex. Most of us are complicit in the culture of sex by watching movies and TV shows, buying magazines, and looking at things on the Internet/social media.

If you think it was okay for you to have premarital sex because you had safe sex, that is, because you used birth control, let me tell you: I used to say that. The truth is, women get pregnant on birth control.

Do you know who Abby Johnson is of the ministry called And Then There Were None? She is a former director of a Planned Parenthood clinic who turned pro-life. She says that most of the women who came into her clinic got pregnant on birth control.

Some people think that if you take the pill 100% correctly, then you won’t get pregnant. Others say that you can still pregnant.

The issue is not whether you had “safe sex.”
The issue is whether we were obedient to Christ.

The Bible does not say, “It’s okay to have sex out of wedlock if you use birth control.”

The Bible does say “the two shall become one” and “the one who joins himself to a prostitute is one body with her” (go read it at 1 Corinthians 6:16).

The point is not whether we should use birth control. The point is that God calls us to purity.

There is nothing in the New Testament that releases you from the Old Testament laws about sex.

Pray As If We’re All in This Together

Nehemiah and Daniel both prayed in confession of the people’s sin—not in self-righteousness but in an attitude of “we’re all in this together.”

Righteousness belongs to You, O Lord, but to us open shame, as it is this day—to… those who are nearby and those who are far away in all the countries to which You have driven them, because of their unfaithful deeds which they have committed against You.
Daniel 9:7 NASB

Daniel 9:(3)4-19 makes a great prayer for our nation! Consider praying this as if you wrote it:

Alas, O Lord, the great and awesome God, who keeps His covenant and lovingkindness for those who love Him and keep His commandments, we have sinned, committed iniquity, acted wickedly and rebelled, even turning aside from Your commandments and ordinances. Moreover, we have not listened to Your servants the prophets, who spoke in Your name to our kings, our princes, our fathers and all the people of the land.

Righteousness belongs to You, O Lord, but to us open shame… Open shame belongs to us, O Lord, to our kings, our princes and our fathers, because we have sinned against You. To the Lord our God belong compassion and forgiveness, for we have rebelled against Him; nor have we obeyed the voice of the LORD our God, to walk in His teachings which He set before us through His servants the prophets.

Indeed all Israel has transgressed Your law and turned aside, not obeying Your voice; so the curse has been poured out on us, along with the oath which is written in the law of Moses the servant of God, for we have sinned against Him. Thus He has confirmed His words which He had spoken against us and against our rulers who ruled us, to bring on us great calamity; for under the whole heaven there has not been done anything like what was done to Jerusalem.

As it is written in the law of Moses, all this calamity has come on us; yet we have not sought the favor of the LORD our God by turning from our iniquity and giving attention to Your truth. Therefore the LORD has kept the calamity in store and brought it on us; for the LORD our God is righteous with respect to all His deeds which He has done, but we have not obeyed His voice.

And now, O Lord our God, who… have made a name for Yourself, as it is this day-we have sinned, we have been wicked.

O Lord, in accordance with all Your righteous acts, let now Your anger and Your wrath turn away from (our land). So now, our God, listen to the prayer of Your servant and to his supplications, and for Your sake, O Lord, let Your face shine on Your desolate sanctuary. O my God, incline Your ear and hear! Open Your eyes and see our desolations…

For we are not presenting our supplications before You on account of any merits of our own, but on account of Your great compassion. O Lord, hear! O Lord, forgive! O Lord, listen and take action! For Your own sake, O my God, do not delay, because… Your people are called by Your name.

I think we are trying to advance the pro-life movement the wrong way.

Here in the United States, abortion is a political issue.
We vote pro-life,
we proudly post about it on social media,
we put bumper stickers on our cars, and
we complain about Roe v Wade anytime that Planned Parenthood is in the news or during the Women’s March.

Is all that really making a difference? Have you ever converted someone who is pro-choice because of your Facebook posts? (I have not.) Do you even have any Facebook friends who disagree with you? (I do!)

Who Are We Trying to Convince to be Pro-Life?

Let’s stop for a moment and think about who we are trying to convince that abortion is wrong. Perhaps if we really want to reduce the number of abortions, we need to reconsider our audience.

Instead of trying to convince our pro-choice-voting friends, we should convince women that God loves them so much that He doesn’t want the pain of abortion for them. I’m not talking about physical pain: I’m talking about emotional and spiritual pain.

Abortion is not just a political issue. It’s a spiritual issue.

As Christians, we are called to love God (see the Greatest Commandment in Matthew 22:37-38) and to love people (see the second “that’s like it” in Matthew 22:39-40). How well are we loving women who have unwanted pregnancies?

Since women are the ones having the abortion, women are our audience. Men are our secondary audience. Yes, men can pressure women into having an abortion, but ultimately women have the control. And in our American society, women are empowered. Isn’t that what the pro-choice movement says?

Women who consider themselves pro-choice either do not have the saving grace of Christ or do not understand what the Bible says about choosing life. It’s our job to teach them.

Do you remember what the Great Commission says? Some of you just said it in your head from memory. Most of us don’t have it memorized. Here is what Jesus said as recorded in Matthew:

“Go therefore and make disciples of all nations, baptizing them in the name of the Father and the Son and the Holy Spirit… (Matthew 28:19)

Most people stop right there. But that’s not all. The Great Commission goes on in verse 20:

…teaching them to observe everything that I have commanded you. (Matthew 28:20a)

When I hear the Great Commission, I hear “baptize them” and absolve myself of responsibility because it’s the pastor’s job to baptize, not mine.

But the Great Commission says to make disciples, and that is my responsibility.

Further, we often quote Matthew 28:19 without including verse 20—teach them. For those of you who have it memorized, did you also memorize verse 20? 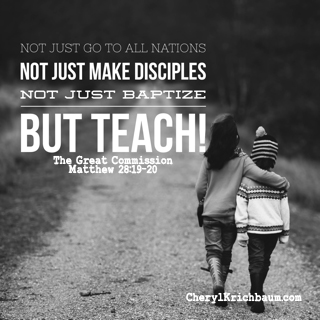 The “nations” that Jesus was talking about in The Great Commission were the ethnic groups other than Israel, that is, the Gentiles—us!

Jesus was telling Jewish believers in Christ (the first Jews for Jesus!) to make disciples out of everyone, baptize them, and teach them all they learned from Him. Not sure you believe me? Check out the definition of “nations”—ethnos—in the original Greek from the Blue Letter Bible.

We here in the United States are full of the nations or ethnic groups that Jesus was talking about. We are the “melting pot” of ethnic groups.

Jesus was saying that salvation through Him is for everyone, not just Israel. We are part of “all nations,” so those of us who are called to stay here are just as much responsible for the Great Commission as those who are called to be missionaries elsewhere (whether short-term or long-term).

So when we get angry about abortion, are we remembering the Great Commission? Or are we just getting hot-under-the-collar about dead babies? Does anger help us win women for Christ?

Perhaps instead of just getting angry, we should think about those women (and the men who got them pregnant) as potential disciples.

Go (don’t sit around doing nothing) and make disciples, baptize them, teach them all Jesus commanded.

Encountering unwed mothers and fathers is an opportunity to show God’s love and to show them how to feel God’s mercy. That’s putting the Great Commission into practical terms.

With the love of Christ,